Journey: A Story of Compassion in Video Games

Some words on beautiful video games and their affect on humans beings.

Note: If you've never played Journey by Thatgamecompany, this post is likely to contain spoilers and other things that may detract from your enjoyment of playing through the game. You have been warned.

A little while ago, while watching a friend play, I bore witness to the most moving playthrough of Journey I've ever seen. It's important to understand a little about this friend before telling the story, though, so bear with me!

Ray is a programmer. He's a very good programmer, has a fine eye for detail and strongly believes in getting things done the correct way regardless of how long this might take or how tedious it might be.

He lives in central London. He drives but we all know that doesn't mean anything here, so he commutes to work via tube. Unfortunately, he lives on one of the busier lines and is commonly subjected to everything you might loathe about rush-hour public transport.

Ray wants the world to be a good place. Not just a better place, a good place. He holds absolute standards on the way things should be and he defends them tooth and nail. He disagrees with the shady practices employed by London landlords and has been bitten by them on more than his fair share of occasions. Hidden costs, overcrowded accommodation and poor standards of living have followed him around wherever he has been.

As a result, Ray is deeply cynical of the world around him. He despises living in London and would much rather live in the country, but his skills limit his geographical location and the motivation to find somewhere better after being bitten so many times is hard to muster.

Journey is an odd game. There is no dialogue. There is no definitely-intended, linear story. The game starts with you, a red-robed humanoid with no facial features and very thin legs. You're in a vast desert and in the distance is a large mountain with a brilliant light emanating from it. You spend the entire game heading towards it and through thick and thin you make it there. That's it. You exit the world as clueless as you entered it, but somehow feel better about things as a result.

On top of the very abstract, applicable-to-everyone non-story of Journey this has to be said: the game is beautiful. Considering the comparatively limiting hardware offered by the PS3 (the only platform the game is available on), Thatgamecompany somehow managed to create a uniquely captivating and breath-taking world. I loved it so much I bought myself one of these.

Ray was at my house one evening. We occasionally get together to drink good ale and exchange good music. It's a nice way to pass an evening. On this evening, we got to talking about video games and I asked if he'd played Journey. He said no. I quickly went about rectifying that.

I said nothing. I gave no expectations. I explained that the game was visually amazing but he would figure out the rest as he went along.

An interesting aspect of Journey's gameplay is its multiplayer. The game has a number of distinct levels and if you're connected to a network, you can arbitrarily start a level with another player. You don't get to choose them, it just happens.

The game also has a primitive form of communication. You can "chirp" at each other. It's a little noise and visual cue and you can vary its volume. That's all. It's used in other parts of the game to activate things and whatnot.

Ray got paired with someone quite near the start of the game. This player had clearly played the game before because they knew where all of the easter eggs and other secrets were. For an hour and a half, this player cheerily chirped Ray towards interesting parts of the level and patiently waited for him if he fell behind.

It was really quite lovely.

The best bit, however, was at the very end. The last scene in the game is you at the top of the mountain, walking into the bright light to beautiful, ultimative music. Before that, though, is a small snowy corridor. As Ray and his companion reached this point, his companion started running around him over and over again. After some initial confusion, we panned the camera and saw something similar to this... 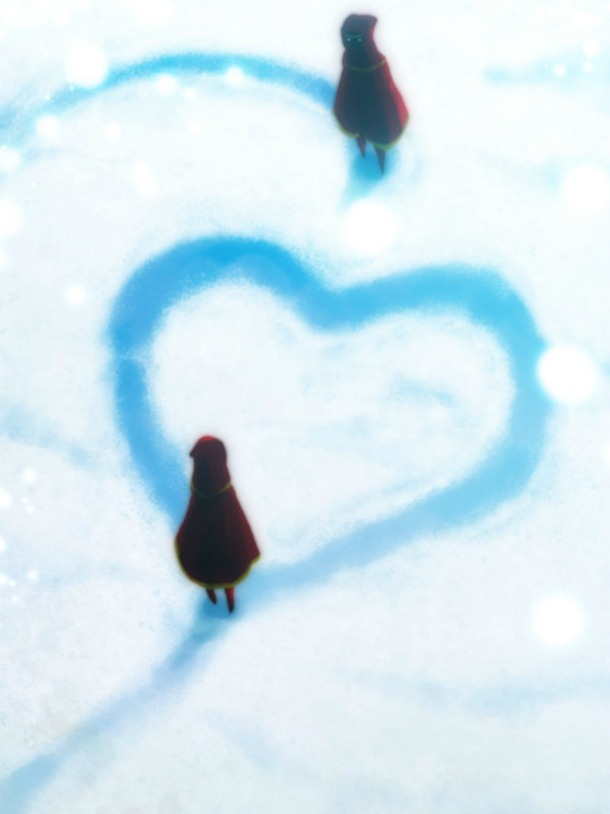 I don't think we exchanged many words initially. For Ray, I can only hope the actions of this anonymous human being restored a little of the faith he had lost in us. It's unlikely the person who played through the game with him that day will ever see that, but this is a beautiful testimony for how important your actions can be. You don't know who's on the other side of that screen. The line between making somebody's day and driving them over the edge is very thin, and being on the right side of that line is so easy.

› Closing thoughts on the game

Journey is unquestionably my favourite game of all time (followed closely by The Last of Us). It says so much without saying anything at all. It is a work of art before it is a video game and Thatgamecompany should be immensely proud of themselves for fully utilising everything the medium has to offer in making an emotionally moving story.

It's quite clear that the game is trying to emulate the stages of life with the journey of your faceless, nameless character.