From being rejected by McDonald's to working at Google

On the 14th of August 2008 I was rejected for a "Crew Member" position at McDonald's. On the 12th of May 2014, I started as a Site Reliability Engineer for Google in London. I am very happy about this and want to write some things about it. 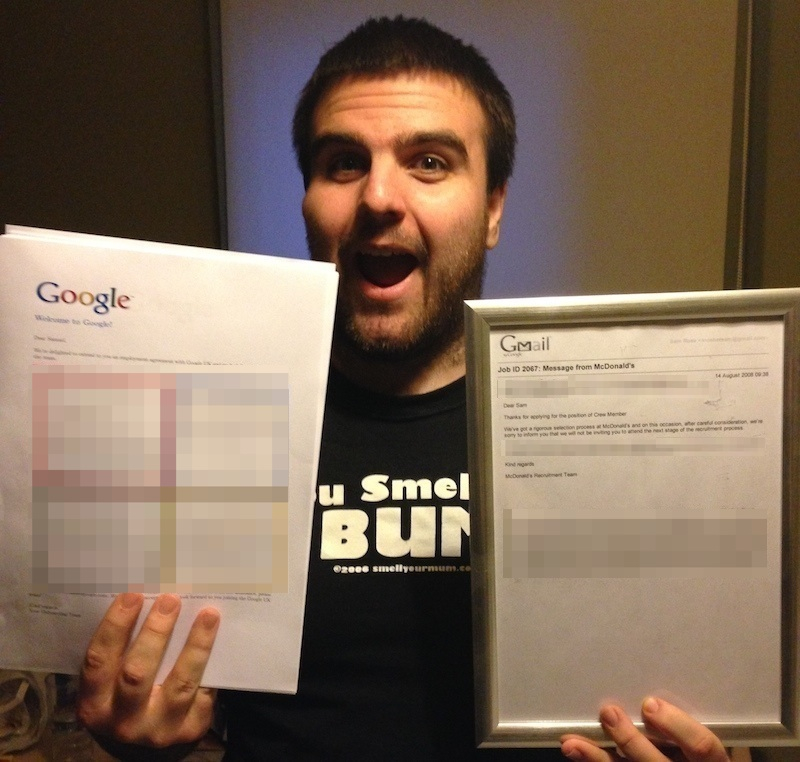 In my left hand is a rejection email from McDonald's. In my right hand is the beginning of an employment contract to work at Google UK.

If you interview at Google, but don't blog about it, did it really happen?

I realise that it's something of a cliché to write a blog post about interviewing at Google. Sorry about that. I promise I'm not going to talk about the interview process much. Getting this job meant quite a lot to me and I did a lot of reflection in the month off I had between jobs, and I want to share some of that.

Warning: this post may contain only trace amounts of structure.

I didn't always want to pursue a career in computers. When I was very young I wanted to be a fireman (get it?). Then a baker. When I got a bit older, I set my heart on being a session musician. This didn't last very long, I got kicked out of A-level music for holding the other kids back. Oops.

On top of that, I have an older sister. She's really lovely and we get on exceptionally well considering how similar we are in age (less than a year between us), but when we were young she was always way ahead of me academically, and I remember thinking on many occasions: "Damn, why can't I get grades like that?"

I also have a close friend who I shall refer to as "He" for the duration of this paragraph. He and I have known each other since an absurdly young age and have been close friends for the duration. We were very competitive kids, and he almost always won. He's more athletic than I am, he did better in maths (which was one of the only subjects I really cared about) and now he's doing a bloody PhD. What a chap.

To complete the picture, I was also a pretty fat kid. Check out this chunkster: 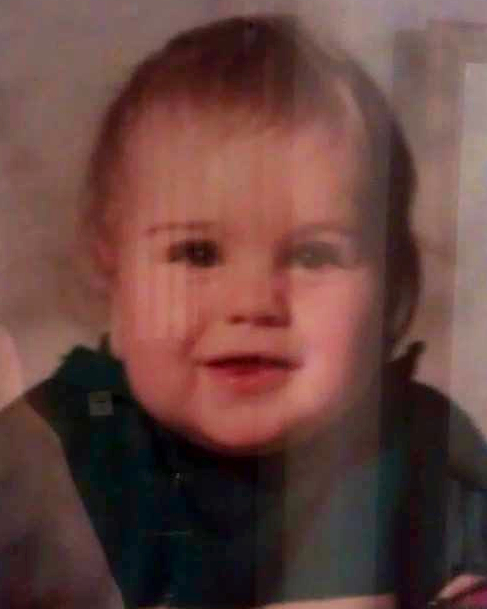 It's quite safe to say that I didn't have a very healthy opinion of myself for a long time.

I could be quite nasty as a result, too. I've made horrible impressions with a lot of people by either being far too self-deprecating, or trying desperately to prove that I'm not a wholly worthless human being and going over the top, often coming off as intolerably arrogant.

Going to university was a fantastic opportunity to start anew. I applied to do Computing only a few weeks after being kicked out of music, and later switched that to Computer Science. I somehow managed to achieve 2 A-levels, my love for mathematics and some brilliant guidance from a select few teachers got me through it. I wholeheartedly believe my high school had the best mathematics department in the country.

It was at university I managed to turn all of my useless self-pity into an intense desire and motivation to succeed. I set my sights high and repeated the phrase: "I want to be the best at what I do" to myself. I even lost a fair bit of weight by surviving primarily on Super Noodles and optimism, not to mention living up a large hill (thanks, Wales).

I didn't plan to work at Google. Not really. I did want to, though. I used to joke with friends at university when asked: "What are you going to do after graduation?" with the answer: "Probably get head-hunted by Google." Then I got an email one day (January 8th, 2014) saying I seemed like a good fit and would I like to apply. Who? Me?

This came as quite a shock. I'd previously been preparing to interview at Facebook but got scared after going into their UK offices and having the full process explained to me. In no universe did I feel confident enough to implement algorithms on a whiteboard in C, and that was still true after receiving the Google email. But the recruiter seemed convinced, so I decided it was worth giving it a shot.

Due to my lack of self-belief, the first thing I did after receiving the Google email was to check if it was fake. I looked up the name of the recruiter and checked the email headers. It looked about as legit as you can get. GMail hadn't marked it as suspicious and this seems like something they'd know, right?

A few emails, phone calls and weeks later, I was on the 38 bus on the way to the Belgrave House office in London. I hadn't slept a wink because I managed to spill a full pint of water on my bed. I felt like I was going to throw up. After forcing myself to eat something and listening to P Diddy's "Bad Boy For Life" to psyche myself up, I met with my recruiter. Roughly 6 hours of whiteboards, algorithms and a second bus ride later I was in bed. Couldn't think. Needed sleep. Brain off.

That's the short version. The reality is actually more like 2 months of phone calls, office visits and preparation every evening. I'm told that's quite a lot shorter than the norm.

I honestly couldn't believe it. The process which had felt like an eternity came to an end with the words: "Does this sound like an offer you would be willing to accept?" and then me bursting out laughing. What a stupid question. He may as well have asked me if I would like to continue breathing. We're in the middle of a horrible part of economic history and this 23-year-old McDonald's-reject, accidentally-programmer just got offered a job with one of the most difficult to work for companies in the world, in one of the most challenging roles. I would be lying if I said I didn't feel proud of myself.

It might be bad to admit this, but achieving something only a small percentage of human beings have achieved calmed me down a lot. The validation has helped me feel more comfortable with myself and my abilities.

I had a month off between jobs, and in that month I spent a lot of time thinking and managed to get rid of many years of negative attitude towards myself. I now have a clearer focus on new possibilities and where I want to go from here.

I can also stop worrying. I can stop whenever I want. I probably won't, but I can.

› Words to the wise

The golden rule, as always, is DON'T PANIC. Things that seem difficult now will seem easy in time, and if you try really hard and prepare enough then eventually you will get where you want to be.

If you do get to where you want to be, remember you have an implicit responsibility to help others do the same. Share your knowledge, time, experience and patience with anyone who seems like they would benefit from it. It's often a fallacy when people say there was no luck involved in their path to success. There are always things that happened that were not a direct result or intention of the protagonist in any story. That's not to say that luck is a substitute for hard work, or that luck isn't increased for those who broaden their horizons and make an effort to open some of their own doors.

Lastly, if someone in a successful position does go out of their way to give you a leg up, don't forget to thank them! In the weeks after I got the job, I tried my best to thank everyone who played a role in me becoming a programmer and getting to where I wanted. There are some very key figures in my life's story that, were they absent, I wouldn't be anywhere as close to my goals as I am now. Those people are my heroes and are entitled to an endless supply of Sam-hugs.

It feels good to get this off my chest. Thanks if you read to the end :)