If you work in tech, and you use the cloud in any way, you've probably heard of Kubernetes. It's inescapable now, and there's no shortage of takes on it.

I've worked in a few companies that have used Kubernetes, but never been close to it. I've used in-house tools that communicate with it, or CI/CD systems that deploy my code in to it automatically. This has left me not really knowing what Kubernetes is or how it works.

I'm embarking on a journey to create a production-ready Kubernetes cluster in my own home.

At the end of this post I will have shown you:

I've also wanted to slide down the /r/homelab rabbit hole for a while, so here's what I bought to get started:

Here's what it all looks like when put together: 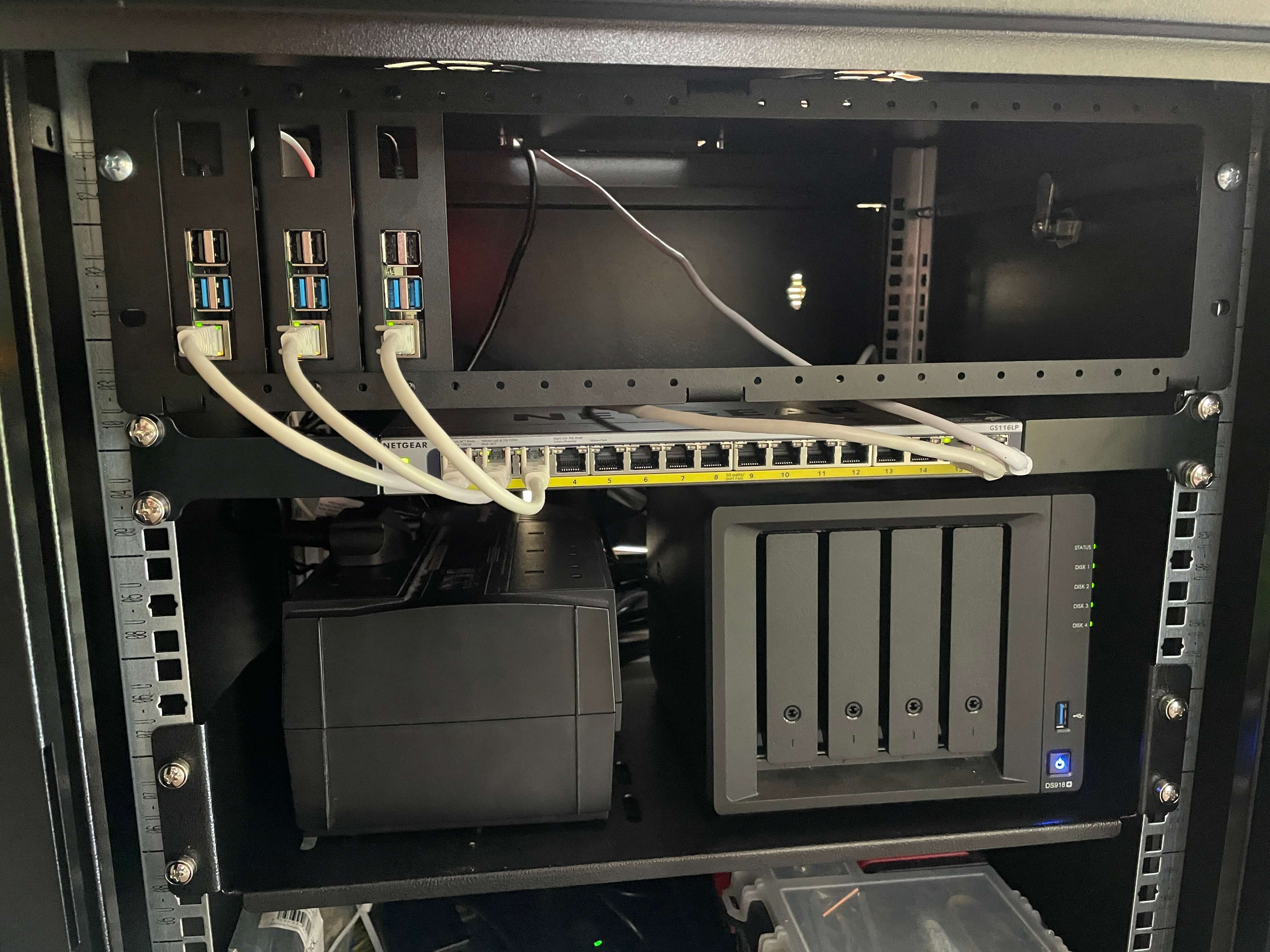 Also pictured here is the shelf, which is holding a UPS on the left and a NAS on the right. I had those things already, so didn't list them as part of what I bought for this project. While the UPS is optional, the NAS is quite critical to my setup. It will eventually host all of the persistent data for my cluster. More about this in the 2nd part of this series.

The first step is to get an OS running on the Raspberry Pis. While the official documentation on creating a bare metal Kubernetes cluster recommends using a deb/rpm-compatible Linux distribution, I'm a long-time fan of Arch Linux. Surely I can't be the first person to want to do this on Arch?

Fortunately, I'm not. Morten Linderud, part of the Arch Linux security team, has written a great blog post on getting a bare metal Kubernetes cluster working using Arch Linux. There's only one small gotcha: he didn't do it on Raspberry Pis.

Before running through the steps in his blog post, we need to get Arch running on the Pis. I followed this guide from the official Arch Linux website, which worked perfectly. I followed the ARMv7 installation guide because the disclaimer for AArch64 put me off a little. This decision hasn't hurt me so far, though I have occasionally had to look harder for docker images built for ARM and not ARM64 (thanks, Apple).

I'm going to use kubeadm to bootstrap my cluster, and while kubeadm is an officially supported package in the Arch Linux repos, there's no ARM build of it. There is, however, an ARM build in the AUR. I installed yay as my preferred AUR tool.

To save some time, I'll tell you I needed to install all of the following on each pi:

A lot of them came up during the kubeadm init process. It runs a set of "preflight checks" that require you to install necessary binaries. It also checks to make sure your system has various capabilities, and one of these was missing for me: memory cgroups. I had to add the following onto the end of /boot/cmdline.txt:

And reboot. It also warned me that the hugetlb cgroup wasn't enabled, but it was an optional dependency and I decided to ignore it. This hasn't bitten me so far.

The last thing I did was set the hostname of each of the nodes. Modify /etc/hostname and name the nodes as you see fit. I used kubernetes-master, kubernetes-worker-1, and kubernetes-worker-2. I also gave them static IPs in my local network, and DNS names to make communicating with them easier.

Step 1 to bootstrapping a cluster is to set up your master node. The Kubernetes project ships a tool called kubeadm (Kubernetes admin) that makes this very easy. I ran the following:

The flag --pod-network-cidr is the desired subnet you want pods to live in. I chose something that's very different to my home network so I would be able to distinguish them. The flag --upload-certs I'm not really sure about. Martin Linderud uses it in his blog post, so I did as well. From reading the documentation on the flag it looks like I didn't need it, so try without if you're feeling adventurous.

kubeadm init runs a set of preflight checks first. It's possible you will fail some of those checks. In that case, make sure you do some searching to figure out what's wrong and fix it before continuing.

When kubeadm init finishes, you'll see output that looks like this:

Save that kubeadm join command, you'll need it in a few minutes.

It was at this point that I also copied the ~/.kube/config file to my main development machine and closed the SSH connection to my master node. 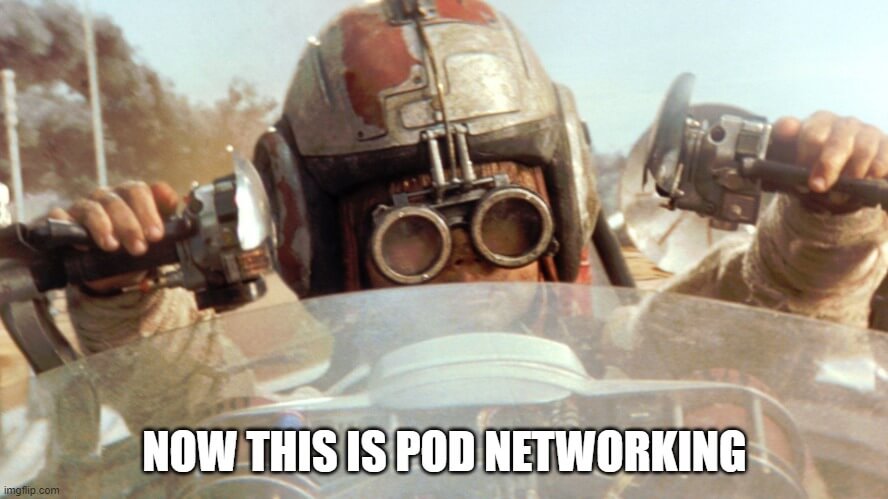 Pod networking has come up a couple of times now, but what is it?

A Kubernetes cluster consists of 0-n nodes. A node is a physical machine running the kubelet daemon configured to be a part of your cluster. On a node, 0-n pods can be running. A pod is a collection of 1-n containers that share a local network. They're called pods as a reference to a pod of dolphins, according to the book Kubernetes: Up and Running.

Because the networks that Kubernetes clusters are deployed in are extremely varied (from cloud providers to datacenters to home networks), and needs will differ dramatically, Kubernetes doesn't ship clusters with a way for pods to communicate with other pods by default. You need to select a third-party solution that fits your needs.

Deciding what pod networking solution is best for you is outside of the scope of this article, I'll just say that I went with flannel. It sounded simple and just sorts out networking between pods without any extra fancy features. Its limitations, primarily that nodes must be on the same physical network to each other, was not a concern for me.

But I found that this didn't work for me. There were two reasons:

While 1 took some time to figure out, largely by doing lots of kubectl describe pod commands, it was a simple fix once I saw the error message.

2, however, was tricky. Pod to pod communication by pure pod IP address worked fine, but any communication through a cluster IP address hanged indefinitely. After a lot of searching, I found someone suggesting to switch away from flannel's default vxlan backend, to the host-gw backend.

What does all of this mean? Fuck if I know. All I know is that it fixed the problem I was having. If you download the flannel manifest from the command above and find the ConfigMap called kube-flannel-cfg, modify the bit called net-conf.json so that it looks like this:

Last but not least, I found that I had to restart my master node after all of these changes. It takes a minute or two to boot back up, but when it did I was greeted with this:

Remember that kubeadm join command I said to save for later? Now is later. Adding nodes to your cluster is as simple as running that join command on each node.

One bit of weirdness I experienced is that after newly joining a node to the cluster, it would get stuck in the NotReady state. This resolved itself after rebooting each node. Not sure what that's all about, I'm assuming network voodoo with flannel.

So now we have a working bare metal Kubernetes cluster, we're ready to start running things on it. We still have a long way to go until our cluster can run any kind of workload we want. We'll need to handle load balancing, persistent storage, and ingress resources. All of that is going to be in part 2.

We have an even longer way to go until we could call this a production-ready cluster. The main thing missing for that is that we'd need to run 3 master nodes, and this is something I want to explore in a future post.